The green ridge upon which Ferncliffe is found was once part of vast tract of mistbelt forest, said to have revealed several new species to science. By 1861 ‘‘thousands of loads’ of timber had been removed from what was called Town Bush. Grassland slopes were planted with gum and pine in 1954; marching plantations still carpet the hills, sucking up water.

But a strip of primary forest remains, with mature lemonwood (Xymalos monospora), quinine (Rauvolfia caffra) and a handful of Henkel’s yellowwoods (Podocarpus Henkelii) amid a riot of creepers. Enormous boulders shoulder their way out of the earth in parts of the forest – how Boulder Dam got its name. This precious public space is under the care of the Msunduzi Municipality. All are welcome! 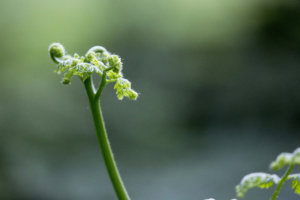 Ferncliffe was once home to English stonemason Jesse Smith, who provided stone for city buildings such as the local Tatham Art Gallery, and built an old mill at Karkloof. As P.G Alcock writes, Smith arrived in Durban with family in 1850 and settled here in the hills then called The Hogsback. He built a cottage that stills stands near the picnic area — but only just; it’s been badly vandalised — and two outbuildings. The property was later sold to the Mason family, who would apparently, when staying in the cottage, send signals to the rest of the family in town by flashing a mirror from Breakfast Rock!

Smith is buried in the Commercial Street graveyard, Pietermaritzburg.

The Nature Reserve, Ferncliffe, was named as a Site of Conservation Significance in 1993. The remaining indigenous forest is under serious pressure, and much of the former grassland areas is under plantation.

Researchers from the University of KwaZulu-Natal are conducting studies to try to understand how best to tackle the infestation of alien plants in the reserve. These are legion: there’s the innocuous-sounding Wild ginger, with its scented, showy flowers, sprawling Lantana, Cestrum, ever-multiplying Bugweed, and Mauritius thorn. The researchers are testing theories suggested by forest ecologist Dr Coert Geldenhuys, which points towards avoiding blanket alien clearing, and using shade to inhibit the spread of aliens. We will try to use these recent research findings to curb and replace these plants.

Hope and restoration go hand in hand. We hope to see more species thrive at Ferncliffe. We hope you do too.
Help plants grow!
Help people grow!
Help Ferncliffe grow!